UK consumer confidence has dropped to its lowest level for nearly 50 years amid the cost of living crisis, according to a survey, fuelling concerns that the economy will slide into recession in 2022.

The UK consumer confidence index fell 2 percentage points to minus 40 in May, its lowest since records began in 1974, said research company GfK in a report published on Friday.

The survey measures how people view the state of their personal finances and wider economic prospects. Joe Staton, client strategy director at GfK, said: “Consumer confidence is now weaker than in the darkest days of the global banking crisis, the impact of Brexit on the economy, or the Covid shutdown.”

The fall in confidence reflected soaring inflation, which reached a 40-year high of 9 per cent in April driven by rising energy prices following Russia’s invasion of Ukraine.

Linda Ellett, UK head of consumer markets at KPMG, said that “as prices and rates rise, the ability of consumers to spend is falling”.

Samuel Tombs, economist at Pantheon Macroeconomics, noted that when the GfK consumer confidence index had in the past fallen below minus 30, “households’ spending dropped” and “recession ensued”.

The UK’s economic recovery had already stalled in February and March and the Bank of England expects the economy to alternate between near-stagnation and contraction over the next two years with economic output unlikely to change significantly before the first quarter of 2024.

The fall in consumer confidence is the first sign that the UK economy is experiencing a protracted period of economic stagnation coupled with historically high inflation, a combination usually referred to as stagflation.

The UK has not experienced a combination of such diverging trends in prices and activity since the 1970s.

Sandra Horsfield, economist at Investec, said that despite household savings building up over the pandemic, a squeeze on discretionary spending looked “inevitable”. She added this was especially true for poorer households, which have fewer savings and tend to allocate a larger share of income to food and energy.

The GfK data, based on interviews conducted in the first half of May, showed that the proportion of people choosing not to make big purchase decisions rose, as confidence levels fell more than the minus 39 forecast by economists polled by Reuters. Perceptions of personal finances and the wider economy also deteriorated.

Waning consumer confidence was reflected across several sectors. Shopping and recreational outings were down 11 per cent compared with pre-pandemic levels, according to Google Mobility data. 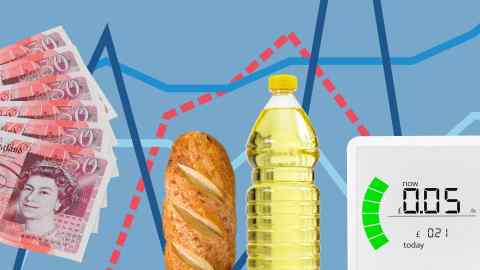 In the second week of May, credit and debit card spending on discretionary items, such as clothing and furniture, was down 14 per cent from pre-pandemic levels, according to BoE data.

A survey by the Office for National Statistics showed that in the first half of May more than half of the respondents had cut their non-essential spending and energy use as a result of rising living costs.

Early in the week, official data showed that UK unemployment fell to the lowest rate in nearly 50 years and more job vacancies were available than job seekers for the first time on record. The tight labour market adds to the risk of higher and more persistent inflation as rising prices become embedded in wage negotiations and in the wider economy.

As a result, markets are pricing the Bank of England to raise rates to 2 per cent by the end of the year from its current 1 per cent. This would mean higher borrowing costs for businesses and households on top of soaring prices.

“The outlook for consumer confidence is gloomy and nothing on the economic horizon shows a reason for optimism any time soon,” said Staton of GfK.

What to Know About Avatar Before Watching Sequel

Angus Cloud Recalls Breaking Skull After Getting “Trapped” in a Pit

How Issa Rae’s Own Social Media Use Influenced Rap Sh!t

What’s Next for Riverdale’s Ryan Grantham After Prison Sentence

We need to pay more attention to misaligned economic signals