Growth in UK manufacturing and services activity has slumped much more than expected and to the lowest rate since January 2021, when the country was in a full lockdown, as the cost of living crisis hit demand.

The interim, or flash, S&P Global/CIPS UK composite purchasing manager index, a barometer of the change in private sector activity relative to the previous month, fell sharply to a 15-month low of 51.8 in May, down from 58.2 in April.

The reading, based on interviews conducted between May 12 and 20, was much worse than the 56.5 forecast by economists polled by Reuters. Any reading above 50 signifies a majority of businesses reporting an expansion in activity.

Williamson added that forward-looking indicators were “hinting that worse is to come” and noted that businesses cited an increasingly cautious mood among households and business customers, linked to the cost of living crisis, Brexit, rising interest rates, China’s lockdowns and the war in Ukraine.

Sterling dropped 0.8 per cent against the dollar on the news. Gilt yields, which move inversely to prices, also fell.

The market reaction “indicates just how deep-rooted growth fears are at present”, said Sandra Horsfield, an economist at Investec.

The slump in the PMI index “is a clear sign that the economy looks set to worsen after contracting by 0.1 per cent in March and increases the chances of a bigger fall in the second quarter and of a recession this year”, said Thomas Pugh, economist at RSM UK.

He added that the jump in the input prices index to a new record suggested that inflation had further to rise after hitting a 40-year high of 9 per cent in April. Survey respondents overwhelmingly cited higher wage bills, energy costs and fuel prices among the reasons for operating expenses rising at the fastest pace since this index began in January 1998.

This reinforces the view that the hit to the economy is unlikely to prevent the Bank of England from increasing rates again in an attempt to rein in fast rising prices. Markets expect the bank’s policy rate to rise by more than 100 basis points by the end of the year from its current 1 per cent.

Concerns about squeezed margins and weaker order books resulted in a considerable drop in business expectations for the year ahead.

Service providers showed the greatest loss of momentum in May with the corresponding index dropping to 51.8, down from 58.9 in April. Survey respondents often noted that economic and geopolitical uncertainty had contributed to a slowdown in client demand. This is despite many businesses in the travel, leisure and events sector reporting strong growth due to the easing of Covid-19 restrictions. 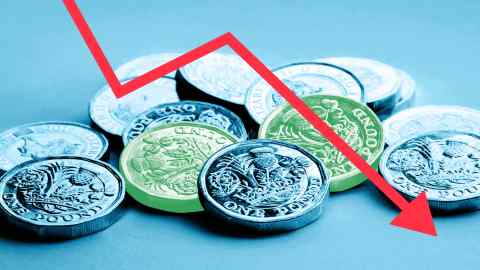 The manufacturing PMI index showed a smaller deterioration in growth but factories reported the steepest drop in export orders since June 2020.

The tumble in the UK composite index was in stark contrast with the stability of the corresponding index for the eurozone, which was boosted by a later reopening than in the UK.

“The tailwind from the reopening of the economy has faded, having been overcome by headwinds of soaring prices, supply delays, labour shortages and increasingly gloomy prospects,” said Williamson.

Eurozone inflation slows to 8.5% on back of lower energy costs

Here’s What Title 42 Ending Could Mean for the U.S.

How Zendaya Made Her Completely Sheer Catsuit the Opposite of NSFW

Amazon Prime Day Pre-Sale on Amazon Devices: Save $700 on TVs and More