A three-decade golden era for globalisation risks going into reverse according to company executives and investors, as world leaders prepare to meet in the Swiss town of Davos for the first time since the coronavirus pandemic began.

The geopolitical fallout from Russia’s war in Ukraine, combined with the disruption to global supply chains caused by the virus, recent market turmoil and the rapidly worsening economic outlook leave corporate leaders and investors grappling with vital strategic decisions, several told the Financial Times in interviews.

“Tension between the US and China was accelerated by the pandemic and now this invasion of Ukraine by Russia — all these trends are raising serious concerns about a decoupling world,” said José Manuel Barroso, chair of Goldman Sachs International and a former president of the European Commission.

Onshoring, renationalisation and regionalisation had become the latest trends for companies, slowing the pace of globalisation, he added: “[Globalisation faces] friction from nationalism, protectionism, nativism, chauvinism if you wish, or even sometimes xenophobia, and for me, it is not clear who is going to win.”

“Pretty much no one has seen” these conditions “during the arc of their investing career”, according to the head of one of the world’s largest private equity groups. Charles ‘Chip’ Kaye, chief executive of Warburg Pincus, said geopolitics had been “on the fringe of the way we thought” since the fall of the Berlin Wall and that this had “provided a certain oxygen to global growth”.

You’re not optimising the economic outcome [with rising geopolitical tensions], you’re creating friction in the system,

However, he said, geopolitics was now “front and centre” of investment decisions just as the “pretty powerful tailwind to asset prices” provided by years of falling inflation and low interest rates comes to an end.

“You’re not optimising the economic outcome, you’re creating friction in the system,” he said of rising geopolitical tensions.

Talk about deglobalisation among companies has mounted in recent weeks. Mentions of nearshoring, onshoring and reshoring on corporate earning calls and investor conferences are at their highest level since at least 2005, according to data provider Sentieo.

The subject will be high on the agenda for attendees at the World Economic Forum in Davos this week. Since its last meeting in January 2020 world events have scrambled the supply chains that underpin the globalisation that the WEF champions.

“Companies are saying I need my production closer to my customers,” said Jonathan Gray, president of Blackstone Group.

The head of Asia’s largest pharmaceutical company said the era of globalisation based on outsourcing functions to cut costs was over.

Christophe Weber, chief executive of Takeda, which is headquartered in Tokyo, Japan, said drugmakers would continue to seek growth in international markets, particularly China because of its high potential. But corporate focus had shifted to a more sustainable form of globalisation, he said: “It’s a question of de-risking your supply chain.”

“It would be a short-cut to say that globalisation is over but the globalisation that people have in mind is not true any more,” Weber said. “The globalisation which existed a few years ago, trade without constraints, and the ‘world is flat’ idea, is finished.”

Takeda has implemented a dual sourcing policy to build more redundancy into its supply chains, Weber added: “I never thought [outsourcing] would work long-term but I think this is clear for everyone now.”

Consumer industries are also experiencing a shift away from globalisation, according to Rachid Mohamed Rachid, chair of Valentino and Balmain.

Some luxury companies are rethinking their strategy, which tended to rely heavily on global branding, selling to tourists and shipping goods around the world, he said: “The business has gone local . . . Stores today in London or Paris or Milan are now catering for their local residents more than they used to before.” 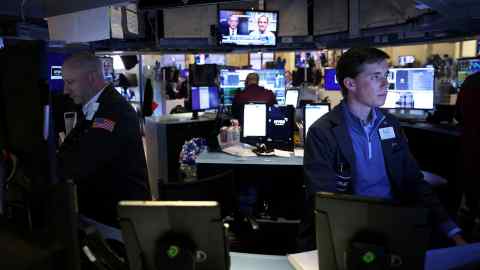 In the past two years companies have begun to “look local and start acting locally instead of acting globally”, he told the FT’s Business of Luxury conference earlier this week. “In different markets like the US, Europe, Asia, even smaller markets like Latin America and Africa, people are looking locally now and I’m sure there’ll be a lot of local deals taking place.”

“If a meaningful part of decades of productivity gains driven by globalisation was reversed in a short period of time, this would drive inflation up and result in a major, protracted recession,” he said. “This is exactly why I believe that major economic powers will come to the conclusion that they have to do everything they can to avert such a devastating scenario.”

Barroso blamed a less co-operative spirit at a political level within the G20 now when compared with the financial crisis in 2008. Political leaders should distinguish between serious geopolitical differences and the necessity to tackle challenges such as public health and climate change, he said.

Germany’s central bank chief Joachim Nagel listed deglobalisation as one of the “three Ds” that would “add to inflationary pressures” alongside decarbonisation and demographics.

The shift away from globalisation was being “fuelled by geopolitical tensions and the desire to reduce economic dependencies”, the Bundesbank president said after a meeting of G7 finance ministers and central bank governors in Königswinter, Germany, earlier this week.

Kevin McHale Gives an Update On a Potential Glee Revival

Inside Queen Elizabeth II’s Relationship With Her Grandkids