The £150 council tax rebate that was part of February’s package to help with the cost of living crisis may not reach some people until September, the government has admitted, as local authorities grapple with the scheme’s logistics.

The money for the payments, for which 80 per cent of British households are eligible, has been made available to councils since March 30 and was meant to reach people by the end of April. But some authorities have struggled to deliver it to households, especially to those that do not pay their council tax via direct debit.

Government officials said it was not clear how many people were still awaiting the payment but stressed the money could be claimed until September to make sure that eligible households did not miss out.

Neither Shaun Davies, chair of the Local Government Association’s resources board, said that delivering the payouts had been “a significant task and not without its challenges” for authorities.

He said that most residents who had signed up to pay their tax via direct debit would have already received their rebate: “Councils are focusing now on contacting those eligible who do not pay their council tax by direct debit.”

The LGA said that member councils had raised “considerable concerns” over the administrative burden of the scheme.

Even where recipients had direct debits, sometimes councils found that the name on a bank account did not match the name of a liable party, requiring an “exception report” and manual handling.

Where council tax is paid by other methods, there has had to be an application involving verification of the name and address of the applicant and a bank statement. “There are innumerate scenarios in which these names do not match,” said the LGA.

Local authorities have also struggled to contact thousands of students and may not have done so by the time their summer university term ends. 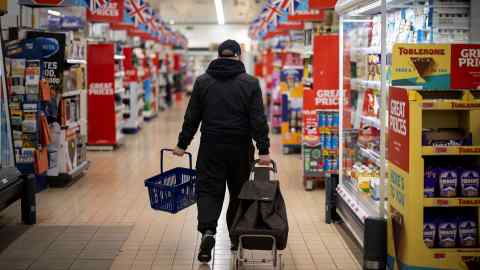 Government officials acknowledged that the council tax rebate was not a perfect mechanism because the payment were granted only to people living in cheaper properties, in council tax bands A to D. That meant others who felt they deserved help but lived in homes outside those categories needed support through another discretionary fund which could be slow to reach people, the officials admitted.

Rachel Reeves, shadow chancellor, said the slow progress of the scheme reflected government failure. “From the outset we said support needed to be delivered quickly to those in need and warned the chancellor’s schemes would be slow and patchy,” she said.

“Now we find that in a number of areas many people who didn’t pay by direct debit have not received the help they were promised . . . The delivery needs to improve because the cost of living crisis is biting hard.”

But Tory MPs have claimed that Labour-run councils should carry their share of the blame for failing to get the money to people fast enough.

A government spokesperson said the £150 rebate was just one part of a wider package of support for people dealing with rising living costs, which has now reached close to £40bn.

“While direct debit is the quickest and easiest way to get the rebate, councils have a range of other options for people who don’t pay this way.”

The government has given councils various options to pay the rebate quickly and securely, whether council tax account credits, Bacs or voucher-based transactions. It has also promised to reimburse them for any administrative costs.

The levelling-up department is collecting data to monitor delivery of the rebate and will publish this in due course, according to officials.

Now is not the time to neglect developing economies

NATO’s Expansion Could Be Risky as Russia’s War Continues

Policymakers want to help with inflation but risk making it worse

The Hearings Have Come For Fox News