Brussels is willing to propose tariffs on Russian oil imports as a fallback option if any EU member states refuse to implement its newly announced embargo on crude.

Leaders agreed at a summit on Monday night to impose a ban on Russian seaborne oil imports, while granting a temporary exemption for Russian oil delivered via pipeline to prevent Hungary from blocking the embargo.

The carve-out from the ban, which benefits Hungary and other landlocked member states, did not come with any agreed time limits, raising questions about whether Budapest in particular could continue using Russian crude for as long as it wished.

Russian oil transported via the Druzhba (friendship) pipeline, which serves Hungary, Slovakia and the Czech Republic, is about 20 per cent cheaper than the alternatives other member states are forced to use.

A senior European Commission official said if Hungarian prime minister Viktor Orbán did not ultimately commit to a cut-off date then Brussels could seek to propose tariffs on the oil. This would make the Russian crude less competitive, potentially forcing Moscow to discount its crude or Hungary and others to pay more.

The imposition of tariffs on Russian oil would require a qualified majority vote among the 27 member states, rather than the unanimity needed for normal sanctions, so Orbán could not veto the move. But it is seen as very much a last-resort by some member states if talks with Hungary on an end-date do not bear fruit, and it could spark a fierce debate at EU leaders’ level.

Singling out Russian oil is possible because the EU has lifted the “most favoured nation” status it conferred on Russia under World Trade Organization rules.

EU leaders including Orbán agreed on Monday to “revert to the issue of the temporary exception for crude oil delivered by pipeline as soon as possible”.

Ursula von der Leyen, the commission president, said on Monday night there were ways of returning to the topic, as well as means to “accelerate this procedure”, without giving details.

One crucial question is whether extra EU money will be available for Hungary to incentivise investments to wean it off Russian oil. However Budapest is hampered by the refusal of the commission to sign off on its application for the EU recovery plan, a key source channel for extra EU energy spending.

Von der Leyen said on Monday that Croatia was ready to expand the Adria pipeline, which runs from the Adriatic Sea into neighbouring states, to replace the Russian crude flowing into Hungary and other landlocked countries via the southern branch of the Druzhba pipeline.

“The preferred option is the import ban,” said the senior commission official. But tariffs are an “alternative possibility we can look into”. Orbán’s position seems weaker, the official said. “I am not so worried that we won’t finally find a solution.”

Brussels has previously discussed longer phaseout periods for landlocked member states, extending the deadline for terminating deliveries of crude to 2024 for some countries, and these are still under consideration, the official added.

“We agreed to quite extensive transition periods for Hungary and Slovakia and still stand ready to go with these longer wind-down periods.” The official said talks on possible tariffs could be initiated if “we get the sense that [Hungary] is just buying time”.

The risk of permitting an indefinite carve-out of crude delivered by pipeline is that it creates a distortion to the single market as some economies will enjoy cheaper oil supplies.

Refineries connected to the Druzhba pipeline have an advantage because Russian oil prices have fallen since European traders started shunning the country’s crude following Vladimir Putin’s invasion of Ukraine. The commission estimates the cost of converting Hungary’s refineries to handle non-Russian crude, which is lighter, to be about €500mn-700mn. 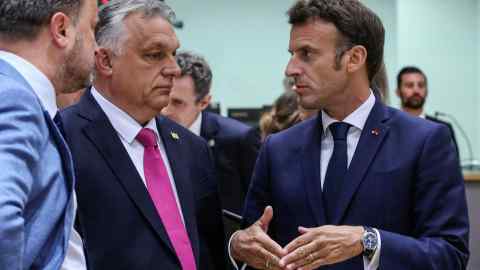 Seaborne Russian Urals crude is trading around $93 a barrel compared with $120 a barrel for Brent, the international oil benchmark. While Russian oil delivered via the Druzbha pipeline may not carry the full discount of seaborne cargoes, depending on how contracts are structured, Hungary’s MOL has said it has enjoyed “skyrocketing” margins for its refineries since March because of the “widening Brent-Ural spread”.

Despite the carve-out for Hungary and other landlocked states, Germany and Poland have voluntarily committed to phasing out imports of Russian crude via the northern branch of the pipeline.

With these commitments in place, the EU’s oil ban will in effect cover 90 per cent of Russian crude by the year-end, officials including von der Leyen have said. Germany’s offer was seen in Brussels as paving the way to a wide-ranging import ban that will cover the vast majority of Russian crude deliveries to Europe.

Hungary did not immediately respond to a request for comment.

Afghan blast in Shiite neighborhood of Kabul kills at least 19

Russia orders search engines to put a disclaimer on Wikipedia results it claims are...

McCarthy Caves, Gives In to Every Demand Made by GOP Detractors: Report

Emily Oster on How Data Can Soothe Parental Anxiety